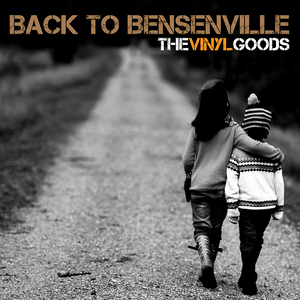 Born and raised in the small town of Bensenville, Illinois, The Vinyl Goods proudly present a tribute to their home town, a new original song called Back to Bensenville.

It’s a nostalgic look back and a modern reflection on the town’s present day.

Proceeds from the sale of the song benefit the Bensenville and Wood Dale Food Pantry.

You can help the cause by:
Purchasing the limited edition CD single

The story of the song

Written by Tim Moberly, Pete Pecoraro, and Andrew Thies, the song Back to Bensenville was inspired by recent return visits to their home town. Growing up in Bensenville left indelible marks and memories on their lives. The lyrics in the song capture some of those moments, including the Gold Rush Day parade and festival of the early 1970’s, playing baseball with the Bensenville Boys Athletic Association (BBAA), discovering new music at Alladin’s Records on Green Street, and enjoying the annual 4th of July celebrations at White Pines Golf Course. The song also reflects on modern changes in the small town, as aging schools are replaced with more contemporary buildings and the runways at O’Hare field negotiate new boundaries for the village. The track was recorded and produced by the band at their home studio in South Elgin, Illinois in January 2017.

The Players (The Vinyl Goods)

Bill Allen –Bass
Although Bill grew up in downstate Illinois, his connection to Bensenville came when the band performed at the Author's and Artist's Fair at Fischer Farm.

Andrew Thies – Vocals and Lyrics
Andrew's family lived on Green Street (and some family members still do). Andrew recently published his own book on personal finance (This Book Will Pay For Itself), was very active in Bensenville Community Theater for many years, and attended schools in District 2 (Green Street, Tioga, Chippewa, Blackhawk) and District 100 (Fenton class of 1984).

Pete Pecoraro - Lyrics
Pete's family lived on George Street during his youth and he later lived in apartments on the north side of town as an adult.  Pete attended schools in District 2 (Green Street, Tioga, Chippewa, Blackhawk) and District 100 (Validictorian - Fenton class of 1984). Pete was also a teacher at Fenton High School.

George McReynolds - Guitar
Although George grew up in another town, his distinctive guitar playing helped shape the "hometown" feel of this track.

Buy the CD Single Buy the MP3 Download Buy the Hi Def Download (FLAC) Buy the 7" Vinyl Single (45) Preview the song below
Listen to
"Back To Bensenville"
on the following
streaming services:
(links go directly to the song)